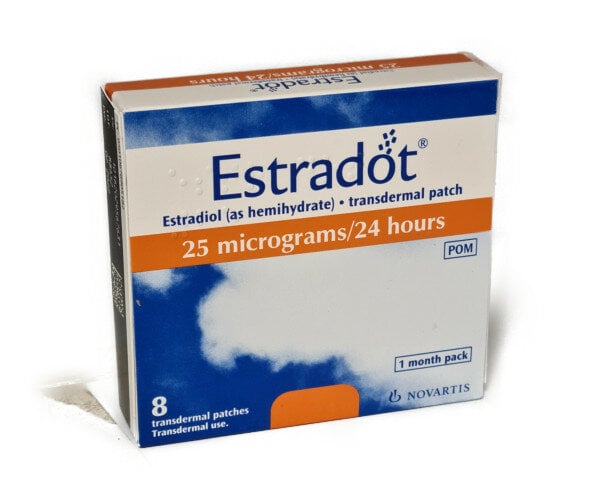 You can order Estradot online from our UK registered online doctor and pharmacy service. After you complete an online assessment, your order will be reviewed by our UK registered doctors. If the order is approved, our pharmacy team will dispense and dispatch your medication to your chosen address using Royal Mail.

How does it work?

Around the time of the menopause, oestrogen levels in the body drop significantly. This can lead to menopausal symptoms such as hot flushes, night sweats, reduced libido, and vaginal dryness.

Estradot patches contain the active ingredient estradiol, which substitutes for the loss of oestrogen during the menopause. By replacing the lost oestrogen, Estradot helps to relieve menopausal symptoms.

The patches release the hormone oestrogen (estradiol), which is absorbed through the skin and into the bloodstream at a gradual rate. The patches contain enough of the active ingredient that they only need to be changed twice a week (every 3 or 4 days).

Taking oestrogen increases the risk of endometrial cancer because oestrogen causes an overgrowth of the womb lining (endometrium). A progestogen hormone should be taken alongside an oestrogen product to protect against this increased risk. Women who have had their womb removed do not need to use a progestogen and can take an oestrogen-only HRT like Estradot.

Estradot patches are available in the following strengths:

Your doctor will prescribe a suitable starting treatment dose. If symptoms do not improve after 3 months, a higher dose can be prescribed to see if symptoms improve. The lowest effective dose should be used for the shortest possible duration. The starting dose for osteoporosis prevention is usually the Estradot 50 micrograms.

The patches should be changed twice a week on the same days (e.g Monday and Thursday). The patch should be applied to the lower abdomen and the next application should not be on the exact same area of skin. Avoid placing the patch on or near your breasts.

The patient information leaflet contains further information and diagrams on how to apply the patch.

Other forms of HRT include:

Our doctors are able to prescribe the following HRT treatments:

Various HRT products have suffered from shortages in the past two years. The products can differ slightly, making it hard to find a direct alternative when one is out of stock.

What are the side effects of Estradot patches?

Common side effects of Estradot patches include:

These side effects may improve over time when using the patches. Read the patient information leaflet for a comprehensive list of side effects.

How long does it take for Estradot patches to work?

The relief of menopausal symptoms may be seen within a few weeks but it can take up to 3 months for the patches to take full effect.

Recently, the availability of HRT products has been sporadic. Currently, Estradot patches are available to order.

The manufacturer of Estradot lists ‘weight changes’ as a common side effect which means using the patches could lead to weight gain for some women.

What happens when you stop using oestrogen patches?

Where is the best place to apply an Estradot patch?

The patch should be applied to the lower abdomen and the next application should not be on the exact same area of skin. Avoid placing the patch on or near your breasts.

The patient information leaflet contains further information and diagrams on how to apply the patch.

Can you wear two oestrogen patches?

No, you should not wear two patches at the same time. If you think the strength of the patches is not high enough, you should discuss this with your doctor who may prescribe a higher strength.

Yes, you can order them online via our UK registered online pharmacy and doctor service. After having an online consultation, our doctors can assess your suitability for treatment and issue a prescription if approved. Please note our terms and conditions.

There is always a risk of side effects when taking any medicine.

Common side effects of Estradot patches include:

These side effects may improve over time when using the patches. Read the patient information leaflet for a comprehensive list of side effects.

HRT can be very beneficial for women with menopause symptoms however, there are risks associated with treatment. The following diseases are reported more often in women taking HRT compared to women not taking HRT:

Oestrogen-only HRT (like Estradot) has an increased risk of womb cancer but this can be mitigated by taking a progestogen product alongside it.

There is evidence to suggest HRT use increases the risk of breast cancer. The risk increases the longer HRT is taken for. This increased risk returns to normal within about 5 years of stopping treatment. The increased risk is higher in women who take combination HRT (oestrogen and progestogen).

The risks of taking HRT may be different in women who have early menopause. If this is the case for you, you should discuss these risks with your doctor.

The risk of blood clots in HRT users is highest during the first year of treatment. The increased risk is up to 3x higher in users of HRT compared with non-users.

Patients should be routinely monitored by their doctor during HRT treatment. It is also a good idea to know some of the symptoms associated with these conditions. More information can be found on the NHS website for signs of a blood clot, breast cancer, endometrial cancer and stroke as well as information on the risks of HRT.

Before taking any medication, it is important to read the Patient Information Leaflet. You can find information leaflets for your medicines by typing them into the search bar at medicines.org, or by contacting us.

During the online assessment, ensure you mention any medical conditions you have.

Estradot is unsuitable for people diagnosed with certain conditions. Examples of these are:

Interactions with other medicines

When completing the online assessment, please list all of the medicines you currently take. Estradot should not be used alongside certain medicines, such as:

Order on Monday to Friday until 3:30pm guarantees next day delivery options