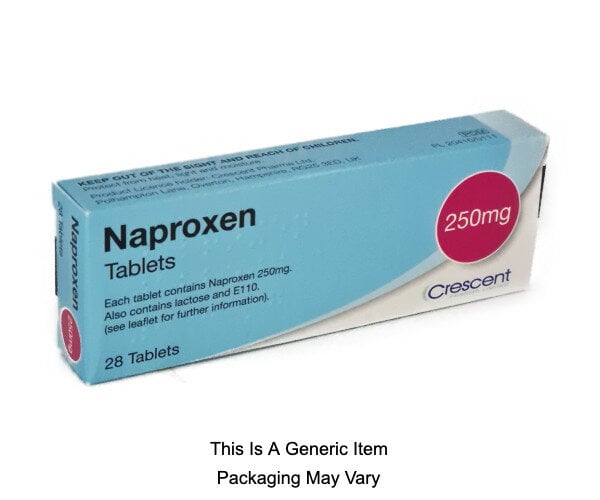 What's on this page?

You can request to buy Naproxen tablets using our UK registered online doctor and pharmacy service. An online consultation in the form of an assessment is required to place an order. This can then be evaluated by our GPs who can make sure it is safe and suitable for you to take.

If approved by our doctors, a prescription is sent to our pharmacy team. It is dispensed and dispatched to your chosen delivery address. We use Royal Mail as a courier and have a range of delivery options.

Naproxen is a painkiller medicine that specifically targets inflammatory pains. It belongs to a medicine class known as non-steroidal anti-inflammatory drugs (NSAIDs). Other medicines in this category include ibuprofen, aspirin and diclofenac. Typically people find that Naproxen provides more inflammatory pain relief than ibuprofen or aspirin.

Depending on the pain severity, 250mg or 500mg doses are available. The lowest effective dose should be used to minimise the chance of side effects. Pain and inflammation should be noticeably reduced in 30-60 minutes after taking a dose of Naproxen.

It is only available on prescription, although you can buy it over the counter for period pain and menstrual cramps from a pharmacy under the brand name Feminax Ultra.

What is Naproxen used for?

It is commonly prescribed for pain relief and to treat inflammation in conditions such as gout, rheumatoid arthritis, sprains and strains and osteoarthritis. Because NSAIDs do not have the potential to cause addiction such as opioid-based painkillers, it is the preferred treatment for those who suffer inflammatory pain. Naproxen (or other NSAIDs) along with paracetamol may make up the base of pain relief treatments before using potentially addictive medicines.

How does Naproxen work?

Yes, Naproxen can be taken alongside paracetamol or paracetamol/ codeine combinations such as co-codamol. However, it should not be taken with ibuprofen, aspirin, or diclofenac because they are from the same class of medicines (NSAIDs) and will cause increased side effects that may be dangerous.

It is important to note that many other medicines can contain NSAIDs or paracetamol in combination such as cold and flu medicines. This can lead to accidental double doses that can result in side effects. Always ensure you are aware of what is in each medicine you take before use.

As with all pain medicines, it is best to use the lowest effective dose required to avoid the potential side effects of treatments.

You should take it exactly as your doctor has told you to. The dose may vary from person to person depending on why your doctor has prescribed it. The usual Naproxen dosage is to take a dose twice a day with food.

Two strengths are available: Naproxen 250mg and Naproxen 500mg. Your doctor will decide the safest strength and dose for you. Usually, you should take the lowest effective dose for the shortest time. However, some people can be prescribed Naproxen long-term to relieve pain in chronic conditions.

If you have been prescribed Naproxen for a long time, it is important that you are aware of the ways to protect yourself from the potential side effects. Refer to warnings and precautions for more information.

For people unable to take this medicine, paracetamol is a suitable alternative as it can be used by most people. Other NSAIDs available over the counter include ibuprofen, aspirin, and topical diclofenac (Voltarol).

A number of other NSAIDs can be prescribed by your doctor if suitable. Examples include celecoxib, ketoprofen, and mefenamic acid.

When taking this medicine, there are some serious side effects to be aware of. If you notice any stomach problems like indigestion, nausea, stomach pain or vomiting, it may be a sign of a stomach ulcer. If you notice any of these symptoms, speak to your doctor immediately.

Other side effects to mention to your doctor immediately are if you notice black tarry stools or you vomit blood or particles that look like coffee grounds. If this occurs, stop taking naproxen immediately and seek medical advice.

It is important to read the patient information leaflet for further information regarding the potential side effects of treatment.

Is Naproxen stronger than ibuprofen?

Both of these medicines are similar drugs and both are types of NSAIDs. Naproxen is generally more potent than low strength ibuprofen that you can get over the counter. However, doctors are able to prescribe higher strengths of ibuprofen which are similar to Naproxen. Both drugs can generally be used as first choice NSAIDs because they have fewer side effects than some other NSAIDs.

Does Naproxen make you drowsy?

Drowsiness is listed as a potential side effect although this may not happen to everyone. Unlike codeine-based painkillers, drowsiness is not an expected effect of the medicine. Avoid driving until you know how naproxen affects you.

Can I buy Naproxen over the counter?

Yes, A brand called Feminax Ultra is available over the counter to treat period pain. However, when used for other conditions such as rheumatoid arthritis, it is only available with a prescription. It is available as Naproxen 500 mg tablets on prescription.

Can you drink alcohol with Naproxen?

Yes, you can drink alcohol while taking Naproxen but it can increase the risk of stomach problems if you drink too much alcohol with it. Avoid alcohol if possible or drink responsibly to avoid stomach side effects.

Is Naproxen the same as ibuprofen?

It is a different drug to ibuprofen. However, they belong to the same group of medicines called nonsteroidal anti-inflammatory drugs (NSAIDs). Ibuprofen can be bought over the counter whereas Naproxen is a prescription-only medicine (except when used for period pain). Both are anti-inflammatory painkillers.

It is not an addictive drug and does not carry the same risk of addiction as painkillers like codeine and morphine.

How long does Naproxen take to work?

You should notice a beneficial effect around 1 hour after taking a dose. However, if you are taking it long-term it can take a number of days for Naproxen to work and have the full anti-inflammatory effect.

Can I buy Naproxen online?

Naproxen, in the UK, is a prescription-only medicine. You can request to order it from certain registered online doctors and pharmacy services such as Simple Online Pharmacy.

Before taking any medication, it is important to read the Patient Information Leaflet:

Other conditions and Naproxen

It is not suitable for everyone to take. People who have had an allergic reaction to Naproxen or another NSAID should not take it. This includes people with asthma who have found their asthma worsened after taking an NSAID.

People with a history of stomach ulcers or gastrointestinal diseases like Crohn’s or ulcerative colitis should not take Naproxen. People with severe liver, kidney, or heart failure are not able to take Naproxen. For a full list of conditions that can be affected by this medicine, see the patient information leaflet. If you are unsure, talk to your doctor or pharmacist for advice.

Interactions with other medicines

Naproxen can interact with a wide variety of medicines. Examples include blood-thinning medicines like warfarin, diuretics, and certain blood pressure medicines. It should also not be taken with other NSAIDs such as aspirin or ibuprofen. This includes low dose aspirin that people are often prescribed after a heart attack or stroke.

Interactions between Naproxen and other medicines can be dangerous and you should check with your doctor if you start any new medication whilst taking this medicine.

Naproxen in pregnancy and breastfeeding

Naproxen does pass into the breastmilk in small amounts. Due to this, it is not recommended to use naproxen during breastfeeding without direct instruction from a doctor.

Order on Monday to Friday until 3:30pm guarantees next day delivery options