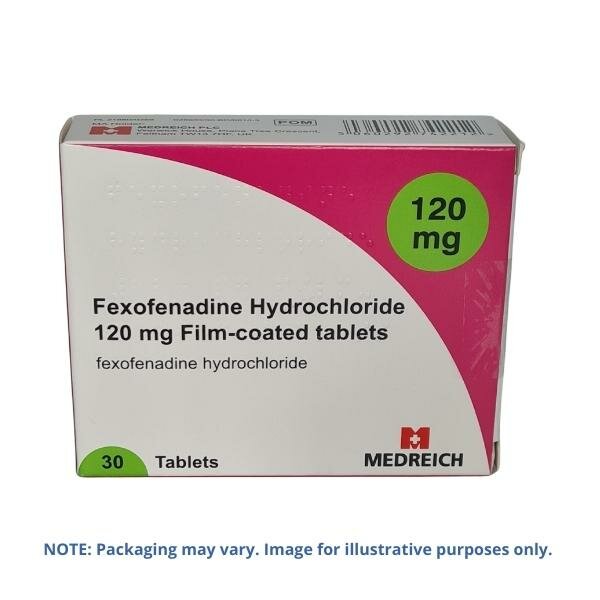 What's on this page?

You can request to order Fexofenadine tablets online from our UK registered online pharmacy and doctor service. As part of your order, you need to complete a simple online consultation form for our doctors to review.

If your order is approved, a prescription is passed to our pharmacy team. They will dispense and dispatch the medicine to your chosen address using Royal Mail.

Fexofenadine is an antihistamine tablet used to relieve the symptoms of hay fever (seasonal allergic rhinitis) such as sneezing, a runny or blocked nose, red or watery eyes, and itchy eyes or nose.

It contains the active ingredient fexofenadine hydrochloride. It is considered a non-sedating antihistamine, which means it is less likely than other antihistamines to cause drowsiness as a side effect.

It is available in two strengths: fexofenadine 120mg and fexofenadine 180mg. Our doctors can only prescribe the 120 mg strength online. You can also request Telfast online, which is the branded version.

How does it work?

Hay fever symptoms are caused by an allergic reaction to pollen. When you come into contact with pollen, the body can react by releasing too much of a chemical called histamine. When too much histamine is released, it can cause hay fever symptoms like itching, sneezing, and watery eyes.

Fexofenadine is an antihistamine medicine. This means it works to block the effect of histamine in the body. This helps to reduce the reaction of the body to pollen. By doing so, it helps to improve hay fever symptoms.

How long does it take to work?

When taking it for hay fever symptoms you should take it every day during the hay fever season.

Some people find it better to start taking it just before the hay fever season starts to help prevent symptoms. If you stop taking it when the pollen count is still high, you may notice your hay fever symptoms return.

It starts to work around one hour after taking a dose. One dose is enough to be effective for 24 hours.

Some antihistamine medications are known as drowsy antihistamines because they are more likely to cause drowsiness as a side effect. This includes Piriton, which contains the active ingredient chlorphenamine.

There are also specific treatments for different hay fever symptoms. Eye drops, such as Optilast and Optrex, can be useful for symptoms like itchy, watery or red eyes. Nasal symptoms can be relieved by using nasal sprays like Beconase, Avamys and Dymista.

Is fexofenadine a strong antihistamine?
Fexofenadine is an effective antihistamine and is considered to be a non-sedating antihistamine. Until very recently, it was only available on prescription whereas other antihistamines can be bought over the counter. If you find it’s not effective at relieving your symptoms, you should try a different antihistamine.
Is fexofenadine better than cetirizine?
Medicines can work differently for everyone. Some people may find fexofenadine is better than cetirizine but other people will find the opposite. If you have tried an antihistamine and it hasn’t been effective, you should try a different one to see if it’s more effective for you.
How long does fexofenadine stay in your system?
One tablet will have a beneficial effect for around 24 hours. The antihistamine effect starts around 1 hour after taking a dose, peaks after around 6 hours and is effective for around 24 hours.
Can I take two fexofenadine 180mg?
You should take this medicine exactly as your doctor has told you to. The recommended dose for hay fever is one tablet once a day. In some circumstances, your doctor may prescribe higher doses for you but this significantly increases the risk of side effects.
What are fexofenadine hydrochloride tablets used for?
Fexofenadine hydrochloride in the UK is used to improve hay fever symptoms. It can also be prescribed to treat other medical conditions like hives, certain food allergies, and insect bites and stings.
Can I buy fexofenadine over the counter in the UK?
Fexofenadine, in the UK, will soon be available over the counter under the brand name Allevia 120mg. However, this brand is not available yet and fexofenadine is only available on prescription. You can request to buy fexofenadine online at UK registered online pharmacies and doctor services - like Simple Online Pharmacy. If your order is approved, a prescription is passed to our pharmacy team. They will dispense and dispatch the medicine to your chosen address using Royal Mail.

The most common side effects of fexofenadine are nausea, dizziness, drowsiness, and headaches. These side effects may affect up to 1 in 10 people. If you find it makes you feel drowsy or sleepy, you should try a different non-sedating antihistamine instead.

There can be less common, but more serious, side effects. See the patient information leaflet for a complete list of side effects. You should report any side effects you experience to your doctor or pharmacist.

How to take Fexofenadine

For adults and children aged 12 and over, the recommended dose is one tablet daily. Take your dose with water before a meal. Always take this medicine exactly as your doctor has told you to.

This medicine isn’t recommended for people over the age of 65. This is because there hasn’t been enough research on its effect in this age group.

There can be drug interactions between fexofenadine and other medicines that can make you drowsy. You may find that taking these together increases the side effect of drowsiness.

If you are pregnant, you should speak to your doctor for medical advice before taking fexofenadine as it may be unsuitable. It should not be used by breastfeeding women.

Drinking alcohol with fexofenadine may increase the likelihood of feeling drowsy or sleepy.

Before taking any medication, it is important to read the Patient Information Leaflet:

Order within for guaranteed next day delivery options